For those that missed it, now that I've been back in the office for a few weeks and caught up on the other benchmarks and articles for May and beginning the work for June, I'm back to looking into the Linux kernel power regressions reported more than a month ago -- i.e. Linux Has Major Power Regression and Another Major Linux Power Regression Spotted.

The notable power regressions that are hitting many users (the Ubuntu bug report, but it's an upstream kernel problem and thus plaguing other Linux distributions too) as of right now is not resolved in the Linux 3.0 kernel. The first regression originally reported on Phoronix was introduced during the Linux 2.6.38 kernel merge window and became widespread soon as Ubuntu 11.04 and Fedora 15 were released as the first major releases with this newer kernel. But as I later found, there's another power regression too causing a measurable performance loss and that's been around since the Linux 2.6.35 release.

Fortunately, some discoveries are being made in automatically bisecting these regressions and further reducing the kernel's power usage. 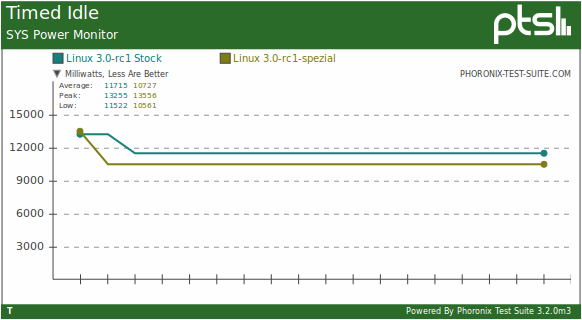 This is being done using the Phoronix Test Suite and related components.

Most recently, the new Intel Sandy Bridge laptop is being used to speed-up this process thanks to its fast Core i5 CPU and Intel solid-state drive. Unfortunately though, the Sandy Bridge notebook doesn't work going back to Linux 2.6.34/2.6.35 era to figure out the previous regression.

The other notebooks in the office are less than ideal for how quickly (or slowly) the kernel builds with still needing to monitor them for manually toggling the AC power / battery. With that said, I'm still looking for a UPS power system (or a smart AC power meter) with a USB interface that's cost effective (less than $100 USD) and can accurately monitor the Wattage under Linux (e.g. from an initial glance, APCUPSD doesn't seem to report the power consumption explicitly but rather as a percent, etc). That way the process can be fully automated for not only bisecting the power regressions but also testing other useful kernel configurations, and to be done so using some fast Intel 6-core Gulftown hardware. Recommendations of particular UPS models can be sent via Twitter or in the forums.