On Monday we will be publishing our results from the 2009 Linux Graphics Survey, but when looking over the results there is one set of numbers in particular that jumped out (though there are a few other interesting figures too). Below is a prelude to the Phoronix survey results that will be published on Monday. The below graph shows how the ~14,000 respondents during our month-long survey responded to what Linux graphics survey driver they were using. 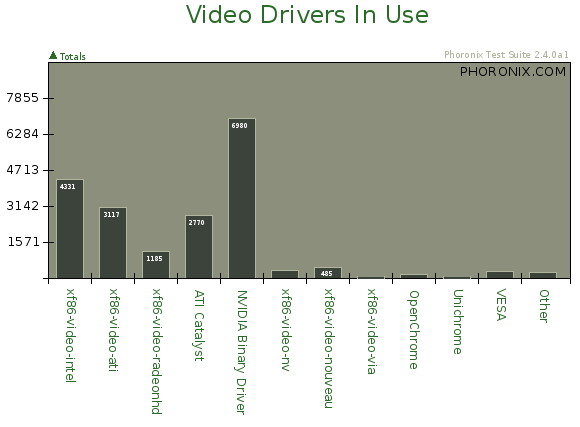 The NVIDIA binary graphics driver on Linux was most common, but that isn't a shock at all considering they are the most popular graphics vendor for Linux at this time, but their customers right now are pretty limited to using their binary driver as Nouveau isn't ready for mainstream adoption. NVIDIA's binary driver was also most popular in our 2007 and 2008 surveys too, but that isn't even what surprised us about these results. It's the ATI numbers.

For the first time that we have ever hosted this Linux graphics survey, has an open-source ATI driver finally outpaced AMD's official Catalyst Linux driver in terms of adoption. As is said in Monday's article:

This is the first year that there were more people using the open-source ATI driver (through the xf86-video-ati DDX driver) than AMD's official Catalyst driver! There were 3,117 counts for xf86-video-ati, 2,770 for the Catalyst driver, and then 1,185 installations still using the xf86-video-radeonhd driver. Last year the Catalyst / fglrx driver had a 6% lead over the -ati driver. This was a bit surprising to us, but unlike NVIDIA, AMD backs a viable open-source strategy for their hardware via providing open documentation and significant contributions to the open-source ATI Linux driver stack. The open-source ATI Linux driver stack provides kernel mode-setting, 2D / X-Video acceleration, and modest 3D support for almost all of their graphics cards, while support for some of the newer GPUs is still emerging.


So while the Catalyst Linux driver may offer faster 3D performance, support for CrossFire, OverDrive, Big Desktop, XvBA, and many other features, the open-source ATI driver stack is actually becoming more common with its "out of the box" support in many distributions that provides working Compiz, support for some non-demanding games, and just a pleasant experience that should "just work" for most hardware and it seems to be pleasing many of its users. In 2010 there is also the potential for the open-source ATI driver numbers to rise even higher as ATI kernel mode-setting finds its way in more desktop distributions, Gallium3D starts to take focus, more power management work takes place, and other improvements made.