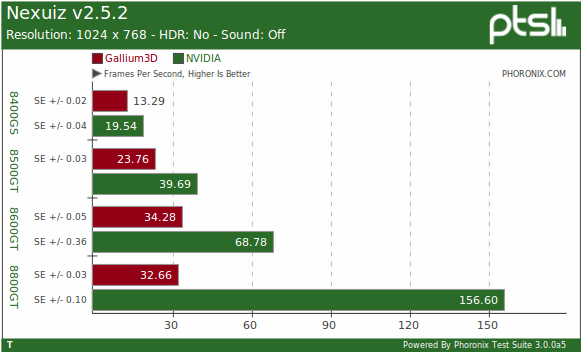 While it is unfortunate that the GeForce 9 and GeForce 6 hardware we attempted to used as part of this comparison had regressed to the point of being unstable, for the GeForce 8 hardware the performance was surprising to say the least. On the lower-end GeForce hardware, the performance of the Nouveau driver relative to the NVIDIA driver is at a surprising high point. With the GeForce 8400GS, the Nouveau driver had an average frame-rate of 13 FPS while the NVIDIA driver was just at 19 FPS, or only 46% faster. While this is still a sizable difference, the low-end GeForce Radeon HD 3650 with its proprietary driver was 3.56x faster than its Gallium3D driver.

The NVIDIA frame-rate though does appear somewhat for Nexuiz at 1024 x 768 with the 260.19.29 driver, but even with the GeForce 8600GT it was running at half the speed as the proprietary driver. With the GeForce 8500GT, the Gallium3D driver was 60% the speed of the proprietary blob. This is quite fascinating and good considering that the Nouveau driver was written via clean room reverse engineering without any support from NVIDIA.

What is a bit unfortunate though is that with the higher-end ASICs, such as the GeForce 8800GT, the Nouveau driver appears to hit a wall. With the Nouveau Gallium3D driver, the 8800GT isn't any faster than the 8600GT while the proprietary driver speeds up a great deal. For the GeForce 8800GT this leaves it at just 20% the speed of the binary blob.