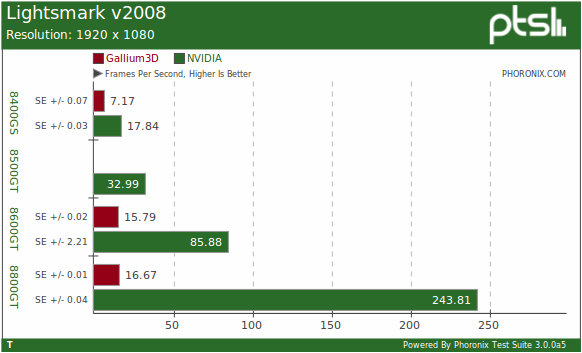 Lastly, with Lightsmark the Nouveau driver performance was well behind the proprietary driver.

When going through the first few results the Nouveau Gallium3D results were surprising. Relative to the speed against the proprietary NVDA driver, the Nouveau Gallium3D results were impressive in cases of being more than 50% the speed of the official driver. While this is still measurably behind the official driver, it's quite impressive for a Gallium3D driver especially one that's created by the open-source community via reverse engineering without any official support from NVIDIA or any corporations besides the contributions of a few Red Hat employees and recently with PathScale. The Nouveau Gallium3D driver in these first few tests even did better relative to the binary driver than did the AMD Gallium3D driver that is worked on by both AMD and the open-source community with official documentation.

While the Nexuiz, VDrift, and Warsow results in particular were favorable for Nouveau Gallium3D, the speed relative to the binary driver wasn't carried throughout all of the tests as with OpenArena and Lightsmark there was ground lost to the proprietary driver, When using the higher-end GeForce 8800GT, the Nouveau performance also was not any better than the GeForce 8600GT. The lower-end GeForce graphics cards are where Nouveau did the best, but with the higher-end GPUs, there are CPU bottlenecks and optimizations lacking that make the more respectable GPUs perform not as good. All of this testing is also with GeForce 8 series hardware as unfortunately the GeForce 9 support has regressed for us when using the Linux 2.6.37 and Mesa 7.10-devel code compared to in past months.

If using OpenBenchmarking.org to analyze the overall performance with the geometric mean of the GeForce 8 series with the Gallium3D driver versus NVIDIA's proprietary implementation, the official driver is 2.51x faster. While this is still a wide margin, it is better than the ATI side where the Catalyst driver across multiple generations was 5.18x faster than the Gallium3D driver. If tossing out the numbers for the GeForce 8800GT graphics card that overall did very poorly with the open-source driver, the advantage of NVIDIA's binary driver drops from being 2.51x faster on average to 1.62x faster.

Previous to this the last time we benchmarked the Nouveau Gallium3D driver officially was in October with Mesa 7.9 and Linux 2.6.36, but with the higher-end GeForce 8600GTS and GeForce 9800GTX hardware.

Though besides still leading handedly when it comes to the OpenGL performance, the NVIDIA driver also has the advantages of better power management support (though Nouveau's is improving), SLI (Scalable Link Interface) support, OpenGL 3.3/4.1 support compared to OpenGL 2.1 with Gallium3D, OpenCL / CUDA, and the huge feature of VDPAU for video playback acceleration. Most new Linux distributions are now at least shipping with the Nouveau DRM/KMS support enabled, and while the Nouveau support is not yet enabled by default in Mesa or libdrm, hopefully in H1'2011 we will see more Linux distributions shipping with the Gallium3D component. This will also allow a better "out of the box" experience with GNOME 3.0 with Mutter / GNOME Shell, Ubuntu's Unity desktop, and KDE with KWin. That is assuming the Gallium3D stability issues affecting some generations of hardware are worked out in time.