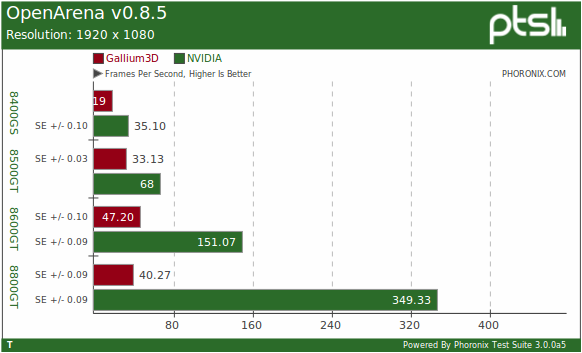 When the resolution was upped to 1920 x 1080, the GeForce 8400GS was no longer producing a playable frame-rate while the NVIDIA proprietary driver had lost more ground than the open-source driver. When going from 1024 x 768 to 1920 x 1080 in OpenArena, the GeForce 8500GT with the binary driver lost 60% of its frame-rate while the Gallium3D driver frame-rate just dropped by 38%. This was similar as well with the GeForce 8600GT where the NVIDIA proprietary driver dropped by 56% and the Nouveau driver was set back by just 34%. The GeForce 8800GT, the highest-end GPU used in this article meanwhile continued to fair poorly against the proprietary competition. 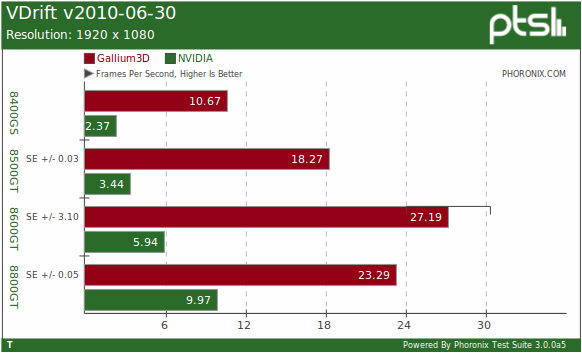 The VDrift racing game continues to be peculiar. With our ATI comparison the lower-end Radeon GPUs on the Gallium3D driver had outperformed the Catalyst driver, which was similarly the case on the NVIDIA side too. All four GeForce 8 graphics cards had ran VDrift at 1920 x 1080 much faster with the Gallium3D driver than did the NVIDIA driver. The NVIDIA driver results led us to believe there is an issue within NVIDIA's driver or Mesa-specific optimizations within VDrift itself.