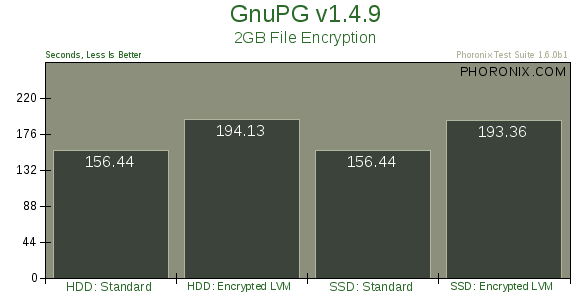 The performance between the SSD and HDD were about the same in the 2GB file encryption performance through GnuPG with the Samsung NC10 netbook.

There you have it, a brief look at the solid-state drive performance under Ubuntu Linux. The advantages of SSDs were apparent in IOzone and parallel BZIP2 compression, but beyond that, the results from the other tests were quite close. When dealing with an encrypted LVM the results were even closer between the HDD and SSD as the solid-state drive takes quite a performance hit. It is, however, important to reiterate that the OCZ Core Series V2 (OCZSSD2-2C30G) is among the lower-end SSDs that use multi-layer cell flash memory. Even in tests where the OCZ Core Series V2 SSD didn't have a striking lead over the Fujitsu HDD there still are the advantages of the lower power consumption, no noise, greater reliability, etc. For mobile devices solid-state drives are certainly ideal. Speaking directly about the OCZ Core Series V2 (OCZSSD2-2C30G) we were pleased by this product and what makes it attractive to many consumers is its lower price point.

Once btrfs has been stabilized we intend to deliver Linux SSD benchmarks on this file-system that promises to offer a solid-state drive optimized mode. To run your own Linux disk benchmarks, be sure to checkout the Phoronix Test Suite.