Flash 10.2 On Intel Will Warm Your Lap, But Not Much More

Written by Michael Larabel in Proprietary Software on 2 December 2010 at 10:54 AM EST. 13 Comments

A few hours ago our Adobe Flash Player 10.2 Linux benchmarks were published that showed off the performance of Adobe's new Flash acceleration method dubbed "Stage Video" that is now in beta. On Linux this Flash Player 10.2 utilizes NVIDIA's VDPAU and Broadcom's Crystal HD APIs for the video acceleration. Some Intel Linux users have claimed though that their video playback experience was better with this proprietary Flash Player, even though their drivers lack VDPAU, so we ran some tests ourselves.

The tests here are just like the NVIDIA VDPAU tests from this morning, various system metrics were monitored by Iveland Alpha 3 while playing back a 1080p H.264 YouTube video clip under Adobe Flash Player 10.1 and this brand new Flash Player 10.2 Beta. The system under test this time was a Samsung NC10 netbook with an Intel Atom N270 (32-bit CPU, the Flash Player 10.2 Beta with video support currently lacks x86_64 support), 2GB of system memory, a 32GB OCZ SSD, and Intel 945 integrated graphics. The Intel Atom netbook was running Ubuntu 10.10 with the Linux 2.6.35 kernel, X.Org Server 1.9, Mesa 7.9, and xf86-video-intel 2.12.0. This was a fresh install of Ubuntu 10.10 as of this morning. 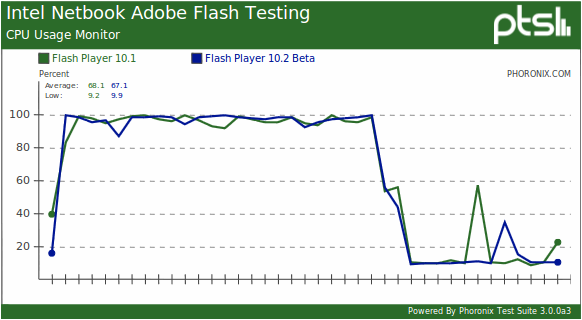 As you can see though, the Intel Atom N270 CPU usage wasn't any lower at all with Flash Player 10.2. Not only was the CPU usage not any lower, but the 1080p H.264 video playback was as choppy as always under Adobe Flash.

Intel's Linux graphics driver only supports the VA-API acceleration method on their newer Clarkdale/Arrandale systems (Core i3/Core i5 mobile and desktop graphics), but that's not even supported anyways by Adobe at this point. VA-API support was supposed to come in the third quarter of 2010 to earlier Intel IGPs, but that still has yet to come nor is there any update on if/when that may come with their developers now prepping the Intel Sandy Bridge support. The Intel i915 and later IGPs do support X-Video, but that is useless compared to VDPAU/VA-API and is unsupported by Adobe's Flash Player.

The ATI/AMD Radeon graphics cards with Linux on both their open-source and closed-source drivers are in the same boat: the open-source drivers boast X-Video and recently there is XvMC for Gallium3D with some Radeon GPUs. With AMD there is the cruddy X-Video Bitstream Acceleration format. Unlike the VA-API to VDPAU and VA-API to XvBA conversion libraries developed by Splitted Desktop Systems, there is no VDPAU to VA-API adapter. 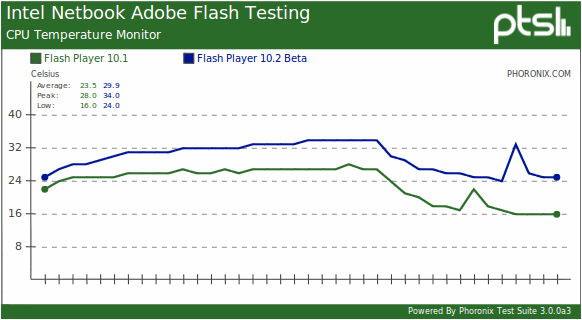 While the CPU usage remained high, the CPU temperature of the Intel Atom was actually higher under Flash Player 10.2. 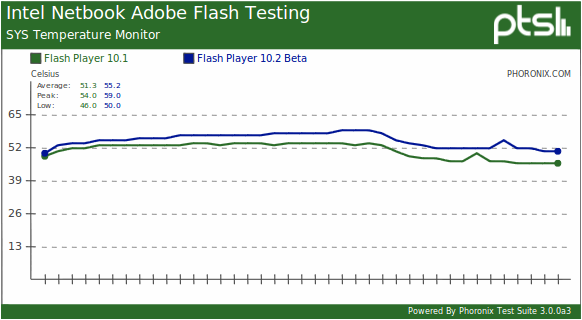