Rafael Avila de Espindola is the fifth most active contributor to LLVM with more than 4,300 commits since 2006, but now he has decided to part ways with the project.

He says the reason for abandoning LLVM development after 12 years is due to changes in the community. In particular, the "social injustice" brought on the organization's new LLVM Code of Conduct and its decision to participate in this year's Outreachy program to encourage women and other minority groups to get involved with free software development.

In part he wrote:

The reason for me leaving are the changes in the community. The current license change discussions unfortunately bring to memory the fsf politics when I was working on gcc. That would still not be sufficient reason to leave. As with the code, llvm will still have the best license and if the only community change was the handling of the license change I would probably keep going.

The community change I cannot take is how the social injustice movement has permeated it. When I joined llvm no one asked or cared about my religion or political view. We all seemed committed to just writing a good compiler framework.


Espindola was one of the most prolific LLVM contributors. I ran some Git statistics today on the code-base to look at his contributions. 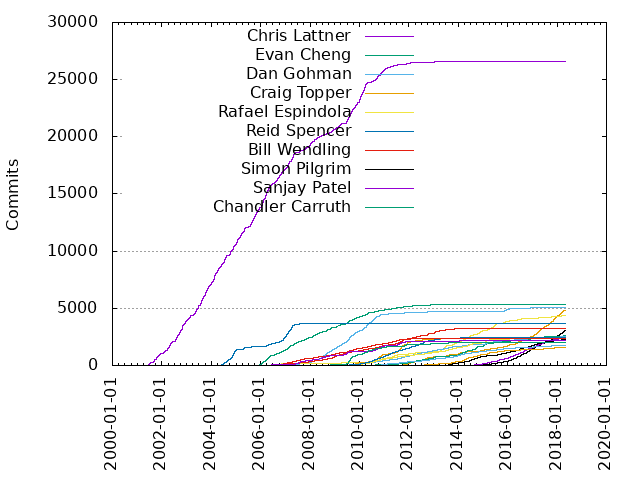 Of the 900+ authors to LLVM, Rafael was the fifth most contributor to LLVM by commit count with 4,344 commits (2.65% of all commits0 and in the process added 157,679 lines of code. He had been contributing since 14 May 2006 and was many times the most active LLVM contributor in a given month while working for the likes of Google and Mozilla. In fact, for 2013 through 2015 he was the most active author each year. His contributions will certainly be missed.
209 Comments
Tweet
LLVM 16.0-rc1 Brings New AMD & Intel CPU Support, Zstd Debug Sections, C++17 By Default
Google Engineer Introduces "Light AVX" Support Within LLVM
LLVM 16.0 Feature Development Ends - Aiming For Early March Compiler Release
Compiling The Linux Kernel With LLVM's Clang Matured In 2022
LLVM Lands New Backend For Xtensa Architecture
LLVM Introducing JIT Support For OpenMP Offloading