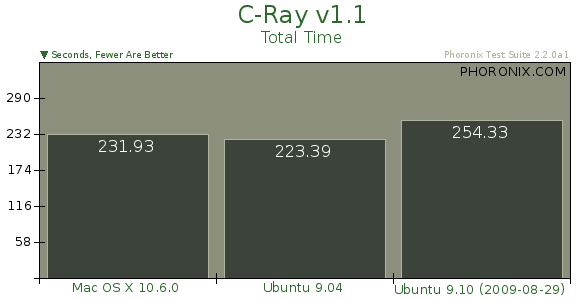 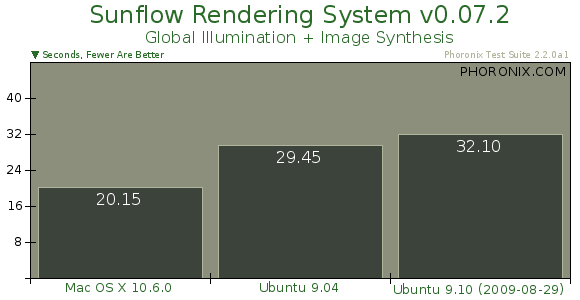 Ending out today's testing are our Sunflow results, where Mac OS X 10.6 ended with another win. This Java-based ray-tracing system was nearly 50% faster than Ubuntu 9.10. This is also another test where Ubuntu 9.10 had regressed compared to Ubuntu 9.04.

Of the 26 tests shown in this article, Ubuntu 9.10 "Karmic Koala" was the clear winner in 12 of the 26 tests while Snow Leopard had won a handful and the rest of the tests had results that were too close to call or unchanged between the Apple and Canonical operating systems. Ubuntu 9.10 can certainly compete with Mac OS X 10.6 when it comes to the performance, but of course a few of these tests do show performance regressions compared to the earlier Ubuntu 9.04 release, an area where Ubuntu developers could improve. Additionally, not all areas of the system or hardware combinations were tested, such as with the Intel Linux graphics performance struggling compared to Mac OS X. On top of that, the Ubuntu Linux installations had NVIDIA's proprietary driver manually installed, where as the "out of the box" experience on Ubuntu does not provide any 3D acceleration for NVIDIA hardware.

Stay tuned for our large Mac OS X, Linux, OpenSolaris, and BSD operating system comparison in the next month.