Written by Michael Larabel in Operating Systems on 9 December 2009. Page 1 of 4. 27 Comments

Tomorrow will mark the first alpha release of Ubuntu 10.04, and while there is still a long journey ahead for this Long-Term Support release before it officially makes its debut in April, we could not pass up the opportunity to provide some early benchmarks of the Lucid Lynx. Ubuntu 10.04 LTS has already pulled in X.Org 7.5 with X Server 1.7 and other updated graphics packages along with the Linux 2.6.32 kernel that it will be using in the final build, which already presents some core differences from the current stable release, Ubuntu 9.10.

The hardware we were using for this round of testing was an Intel Core 2 Duo E8400 clocked at 3.86GHz, a Gigabyte EP45T-DS3R, 2GB of DDR3 system memory, a 160GB Western Digital WD1600JS-00M Serial ATA hard drive, and an ATI Radeon X1800XL 256MB (R520) graphics card that was powering a 1920 x 1080 Dell LCD. We have already ran over 60 benchmarks using the Phoronix Test Suite with the latest Ubuntu Lucid packages, but included in this article are just about a dozen tests that illustrate performance changes between Ubuntu Karmic and where Ubuntu Lucid is at today. These test profiles included MPlayer 1080p H.264 video playback, Tremulous, Apache, PostgreSQL, SQLite, x264, GnuPG, PostMark, IOzone, and Dbench. 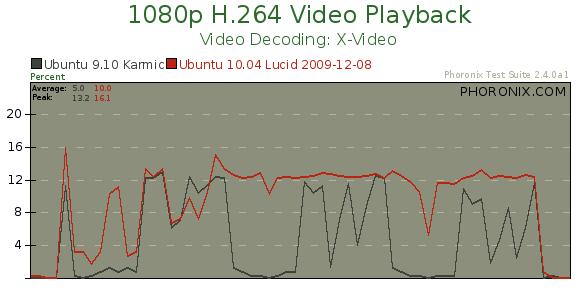 Beginning with our video-cpu-usage test profile for measuring the CPU usage as 1080p H.264 video was played back using X-Video through MPlayer with the open-source ATI driver stack, there is a large regression. The CPU usage when playing back this 1080p video with X-Video on ATI hardware was twice as high as under Ubuntu 9.10. However, while the CPU usage was still twice as high, with this modern dual-core Intel processor that was clocked at nearly 4GHz, the video still played with ease. As can be seen from the line graph, the CPU usage under Lucid is largely following Karmic, but in a few different areas, the CPU usage is not receding. Granted, with all of these benchmarks it is far too early to speculate how the final version of Ubuntu 10.04 will perform, especially with the X stack for Ubuntu 10.04 still being worked on and we are likely to see a newer xf86-video-ati DDX driver at least get into Lucid. 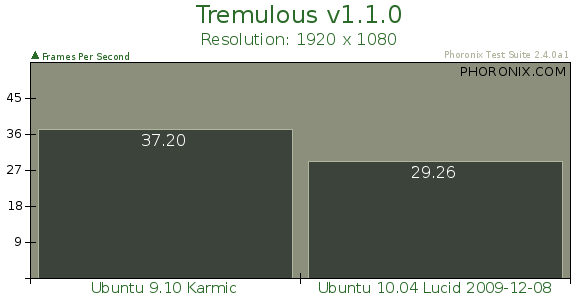 Another graphics-related regression we were quick to spot with the latest Ubuntu 10.04 packages was in the ioquake3-powered Tremulous game where its average frame-rate had dropped noticeably with the ATI driver stack. This could be caused due to a regression either in the 2.6.32 kernel's Direct Rendering Manager code or within Mesa. However, Ubuntu 9.10 shipped with Mesa 7.6.0 where as right now Ubuntu 10.04 is packing just Mesa 7.6.1 RC2. Once released, Ubuntu 10.04 LTS will end up receiving Mesa 7.7 with its stack of improvements and hopefully less regressions. While we confirmed this drop in performance for Tremulous, in other ioquake3 games found within the Phoronix Test Suite like Urban Terror and World of Padman the performance between the Karmic and Lucid packages remained the same.