Written by Michael Larabel in Operating Systems on 9 December 2009. Page 2 of 4. 27 Comments 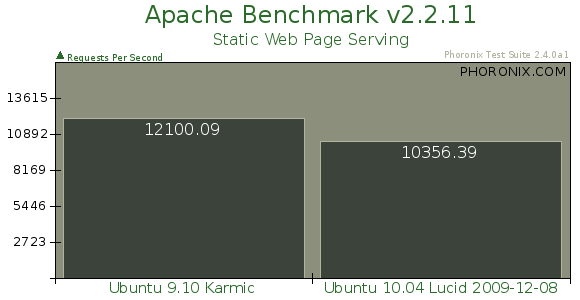 Turning away from the graphics regressions in Ubuntu 10.04 daily, Lucid also slowed down with its Apache performance for serving static HTML web-pages. The number of requests per second that was sustained under Ubuntu 10.04 (2009-12-08) was about 15% less than Karmic. 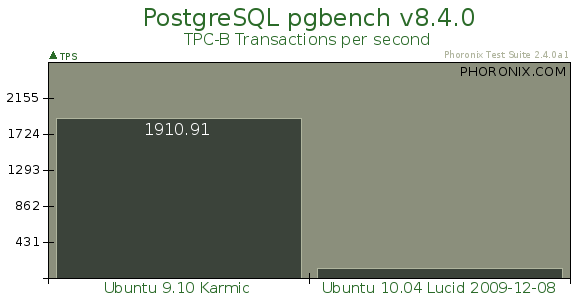 The performance of PostgreSQL in Lucid is absolutely slaughtered when compared to Ubuntu 9.10. In Ubuntu 9.10 it averaged 1910 transactions per second, but with Ubuntu 10.04 LTS right now it is at 114 TPS. However, it is to no surprise and will likely not change. Thanks to our ability to autonomously find performance regressions in the Linux kernel (and you can too with the Phoronix Test Suite), in that same article we pointed out the change that is causing EXT4 in PostgreSQL and some other applications to be much slower in Linux 2.6.32 kernel compared to earlier releases bearing this popular Linux file-system. It was a very simple commit approved by Red Hat that improves the reliability of EXT4 with its default options, but it comes at a severe performance cost for many operations due to flushing the write cache unconditionally in fsync calls. 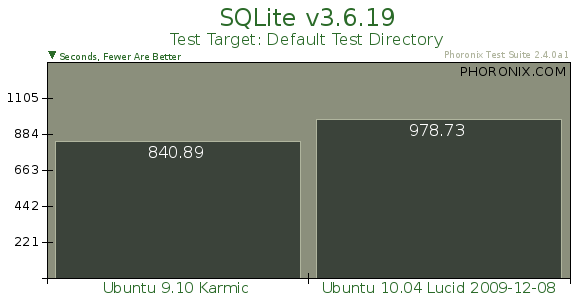