Written by Michael Larabel in Operating Systems on 9 December 2009. Page 4 of 4. 27 Comments 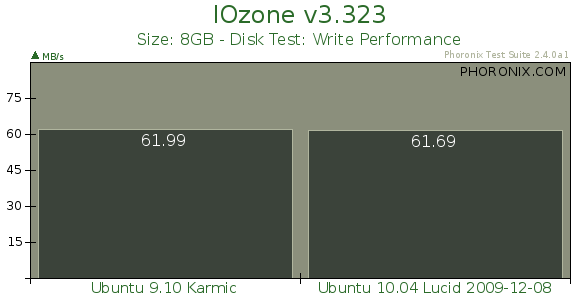 Looking at the 8GB write performance with IOzone, the results between Karmic and Lucid were very close. 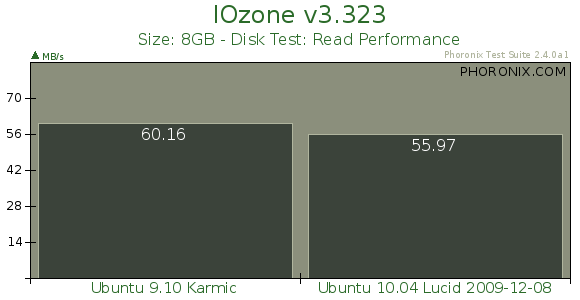 While the 8GB IOzone write performance numbers were close, with the 8GB read performance, Karmic's number had dropped. Right now Ubuntu 10.04 LTS is reading about 5MB/s slower. This drop in the disk's read performance though is not caused by the same issue as the write speed regressions due to the ext4_sync_file change in the Linux 2.6.32 kernel, but something else. 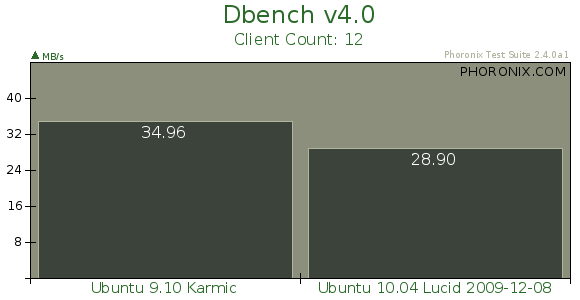 For the last of our initial Ubuntu 10.04 benchmarks is another disk test with Dbench where Lucid had lost some more ground to Karmic. This test may also be partially affected by the 2.6.32 kernel's EXT4 change.

Well, so far Ubuntu 10.04 "Lucid Lynx" is running slower than Ubuntu 9.10. Of the benchmarks we shared today, there was only one performance improvement and that was with the x264 encoding application while in the others (that are largely disk related) there were all performance drops to note, some of which were caused by an EXT4 file-system change in this latest Linux kernel. There are also the ATI Linux driver regressions worth exploring as well.

At the end of the day though, Ubuntu Lucid has just been in development now for about a month and a half and there is much work to be done and many new packages to be merged prior to its release in April of 2010. However, when testing previous Ubuntu releases early in their development cycles we had not found as many negative performance regressions as we are seeing at this point with Ubuntu 10.04 LTS. As the Lucid Lynx grows older we will certainly be back with many more benchmarks as we continue to monitor its performance and add it into our Phoronix Test Farm.