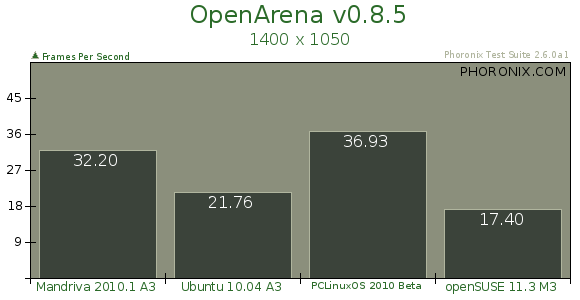 Right from the start this four-way Linux distribution testing began producing interesting results. Mandriva 2010.1 Alpha 3 and PCLinuxOS 2010 Beta were vastly outperforming Ubuntu 10.04 and openSUSE 11.3 with the OpenArena graphics testing from the R500-based Mobility Radeon X1400. This is actually rather interesting as Mandriva is running with the Linux 2.6.33 kernel and Mesa 7.7 while PCLinuxOS is based upon the Linux 2.6.32 kernel (but with some patches like for the BFS scheduler) though it's using the older Mesa 7.5 code-base. Ubuntu and openSUSE are both using Mesa 7.7 and on the Canonical-based OS using the Linux 2.6.32 kernel while Novell's product is riding with the 2.6.33 kernel. PCLinuxOS is based off Mandriva Linux so there may be patches or other work carried by Mandriva that is responsible for this large performance delta. 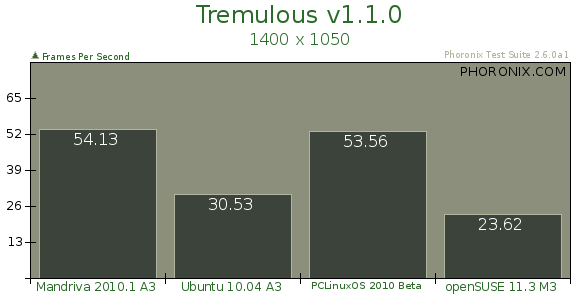 This odd performance disparity continued with the Tremulous test on the ThinkPad notebook with ATI R500 graphics where Mandriva and PCLinuxOS produced more than 80% frames per second than Ubuntu and openSUSE. These results were consistently produced. 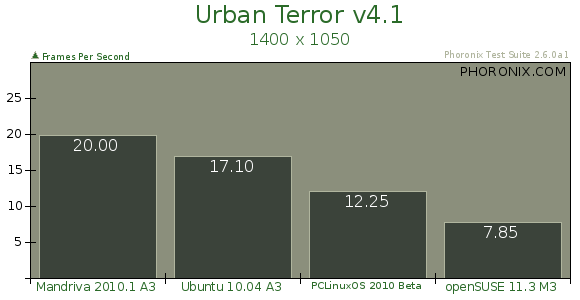 The last OpenGL benchmark in this Linux comparison was Urban Terror and again the results are interesting, but different from the OpenArena and Tremulous numbers. Mandriva 2010.1 Alpha 3 was again well ahead of its desktop Linux competition, but this time Ubuntu 10.04 came in second (about 15% behind Mandriva) while PCLinuxOS was nearly 40% slower than Mandriva. openSUSE was the slowest running with an average of just 7 frames per second compared to Mandriva's 20 frames per second. 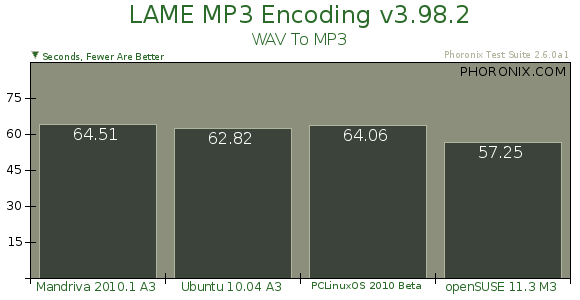 While openSUSE 11.3 was struggling in the OpenGL benchmarks that are stressing the open-source Mesa/DRM stack, this Novell-sponsored Linux distribution was the fastest when it came to LAME MP3 encoding. Mandriva, Ubuntu, and PCLinuxOS were all about 10% slower than openSUSE. The reason for this may be that openSUSE 11.3 is set to ship with the newer GCC 4.5 compiler while the other distributions are using the stable GCC 4.4.x series.