An Update On The Boot & Power Performance In Ubuntu 10.04

Ubuntu 10.04 LTS is booting faster, but next up we are looking at how efficiently it is using the available power. We used the Phoronix Test Suite on the netbook and two laptops with the battery-power-usage test profile. This test profile monitors the battery's power consumption while the system idles for one minute, idles for another minute, but while the LVDS display is signaled off using DPMS, and then when a 1080p is played back in MPlayer with the LVDS panel restored. 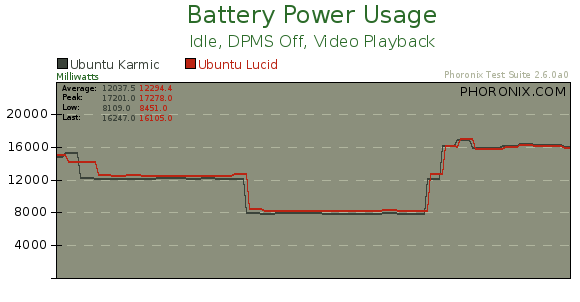 With the Samsung NC10 netbook the power consumption was virtually indifferent between Ubuntu 9.10 and 10.04. 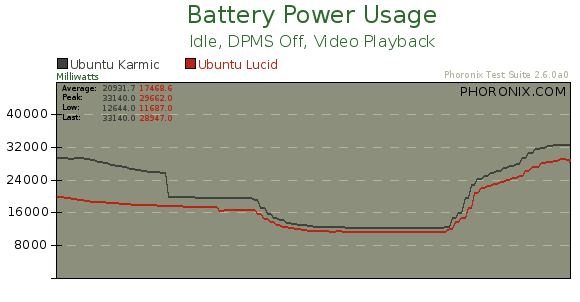 Ubuntu Lucid was consuming less power than Ubuntu Karmic with the Lenovo ThinkPad T60, but with the newer Ubuntu release the LVDS panel was automatically dimmed to a darker state when on battery power than the power performance defaults with Ubuntu 9.10.

Ubuntu 10.04 LTS "Lucid Lynx" is certainly on track to booting much faster than its predecessor, which will certainly please many mobile users particularly those with netbook computers. While it's not been an active area of interest for Ubuntu developers, Ubuntu 10.04 LTS doesn't appear to be any more power efficient than Ubuntu 9.10 besides with some notebooks now dimming to a darker state by default when running on battery power. Sadly, the Ubuntu 10.04 LTS kernel lacks DRM power management support for ATI Radeon graphics processors, which would increase the battery's life for ATI devices, but this will certainly land for Ubuntu 10.10 later in the year.