Written by Michael Larabel in Operating Systems on 15 January 2010. Page 3 of 7. 5 Comments 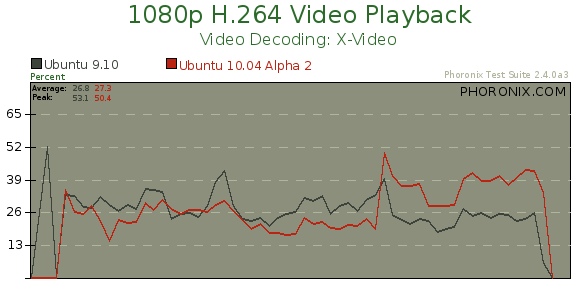 When looking at the CPU usage with our video-cpu-usage test profile using the X-Video decode interface, the CPU usage had deviated between the Karmic Koala and Lucid Lynx, but in the end, the averages ended up being close to each other. 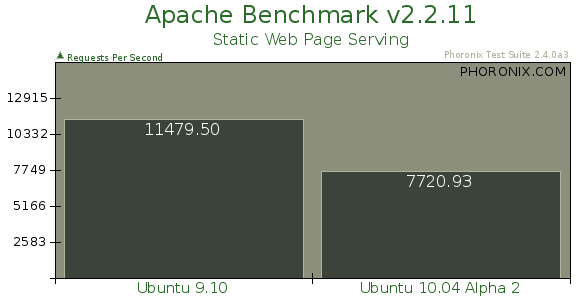 The Apache test had troubles with Fedora 13, but here it shows the Ubuntu 10.04 Alpha 2 performance to be significantly worse off than Ubuntu 9.10. This may partially be due to the upstream EXT4 performance regressions in the Linux kernel that we have extensively talked about, which would also cause the Apache performance in Fedora 13 to suffer in comparison to Fedora 12. 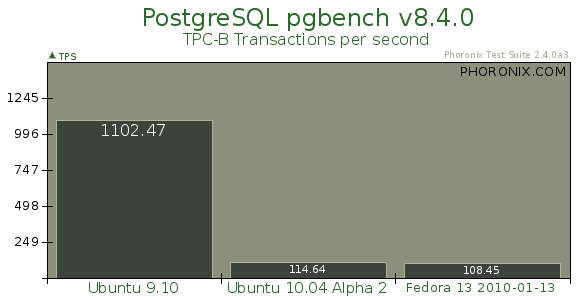 PostgreSQL's performance continues to suffer dramatically under Ubuntu 10.04 LTS and it is not expected that it will change at all for this next Ubuntu release. This major drop in the number of transactions being carried out per second is due to an EXT4 file-system change designed to provide better data safety but with a significant performance penalty. This matter is talked about in Autonomously Finding Performance Regressions In The Linux Kernel. The PostgreSQL performance also suffers in Fedora 13 and any other Linux distributions using the Linux 2.6.32 kernel. Even with Fedora 13 being much earlier into its development cycle and carrying some debugging options by default (along with using SELinux), Fedora 13 Rawhide performed quite closely to Ubuntu 10.04 Alpha 2 in this test.