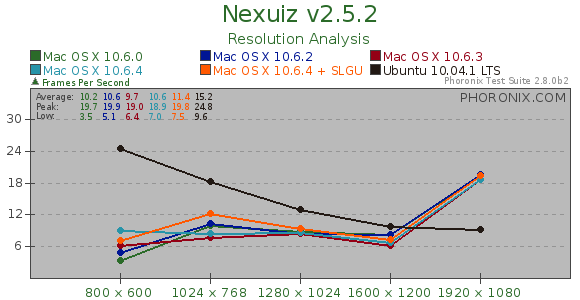 Right from the start, these OpenGL tests proved to be interesting. While we have found issues when running the popular open-source Nexuiz game going back to the original Mac OS X 10.6 release and had even communicated with Apple regarding problems in this area, their OpenGL performance in this test continues to be rather interesting. With Nexuiz on Snow Leopard, when running this game full-screen at lower resolutions than the native resolution, the frame-rate struggles and is lower than when running at the native mode -- as if software acceleration is being used rather than properly accelerating it on the GPU. Even with Mac OS X 10.6.4 with the Snow Leopard Graphics Update, at 800 x 600 the frame-rate in Nexuiz was just 7.46, but at 1920 x 1080 the frame-rate jumped to 19.78. Under Ubuntu Linux with the proprietary NVIDIA driver, the results are as expected with the frame-rate dropping as the resolution/workload increases. At all resolutions tested up to 1920 x 1080, Ubuntu 10.04.1 LTS was faster, but at 1920 x 1080 when Mac OS X was properly handling Nexuiz, its performance trumped that of Ubuntu. Mac OS X 10.6.4 + SGLU were at 19 FPS while Ubuntu was at just 9 FPS. However, the Snow Leopard Graphics Update provided no measurable performance improvements in this game. 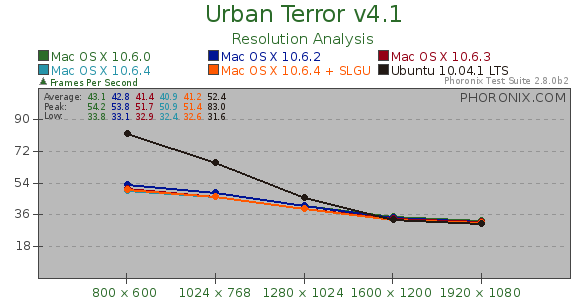 Running Urban Terror does not exhibit the problems Nexuiz does when running at lower resolutions, but the performance does struggle compared to Ubuntu Linux and the proprietary NVIDIA driver. At 800 x 600 the frame-rate with Ubuntu is 63% higher, at 1024 x 768 the frame-rate is 40% higher, but when running at 1600 x 1200 and 1920 x 1080 the frame-rate between the two operating systems are similar. With Urban Terror there again was no OpenGL performance gains provided by the Snow Leopard Graphics Update but the performance throughout all of the Mac OS X 10.6 point releases has been close to the same, although compared to Ubuntu there is still room for some performance optimizations. 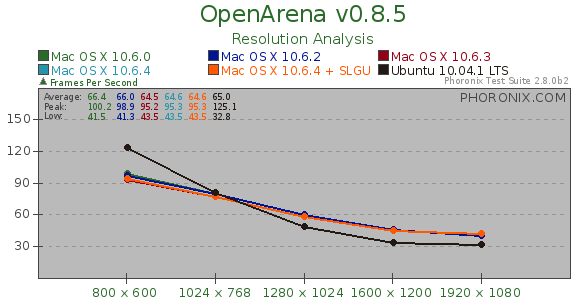