The 32-bit versions of all operating systems were used for testing as the 64-bit Debian daily installer was not working with Debian GNU/kFreeBSD and one of the notebooks also does not support 64-bit software. All operating systems were installed with their stock installation settings. The notebooks we used for testing was an older Lenovo ThinkPad R52 notebook that has an Intel Pentium M processor and then a newer Lenovo ThinkPad T61 that is based around a modern Intel Core 2 Duo T9300 "Penryn" processor. Debian GNU/kFreeBSD was tested with the 7.3 and 8.0 i686 SMP kernels on each notebook, GCC 4.4.4, and the default file-system. Debian GNU/Linux had the Linux 2.6.32 kernel, GCC 4.4.4, and its default EXT3 file-system. Lastly, with the FreeBSD 7.3 and FreeBSD 8.0 operating systems both had used the GCC 4.2.1 compiler by default as well as the default UFS2+S file-system.

The tests we ran on both notebooks in the five different configurations were 7-Zip compression, Gzip compression, LZMA compression, GnuPG, POV-Ray, C-Ray, John The Ripper, dcraw, MAFFT, GraphicsMagick, BYTE Unix Benchmark, Sudokut, SQLite, Himeno, and the Threaded I/O Tester. All of this testing on the Linux and *BSD operating systems was done via the Phoronix Test Suite automated testing software platform. 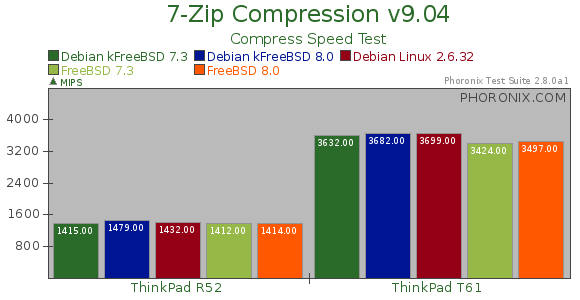 Starting with the 7-Zip compression results across the Linux and BSD systems, the overall 7-Zip performance was not limited by the kernel or operating system to a great extent. With the ThinkPad T61 and its Core 2 Duo "Penryn" processor, the first place contender (Debian Linux) was faster by the slowest OS (FreeBSD 7.3) by just 8%. The compression performance between Debian with the Linux 2.6.32 kernel was just 0.5% faster on average than the nearly identical Debian stack with the GNU/kFreeBSD 8.0 kernel. With the ThinkPad R52 and its older Pentium M class hardware, the kFreeBSD 8.0 kernel ended up being about 3% faster than the Linux 2.6.32 kernel, but the FreeBSD 7.3 kernel was slower than that. Using the FreeBSD 7.3 and FreeBSD 8.0 operating systems on both notebooks was slower than using Debian. 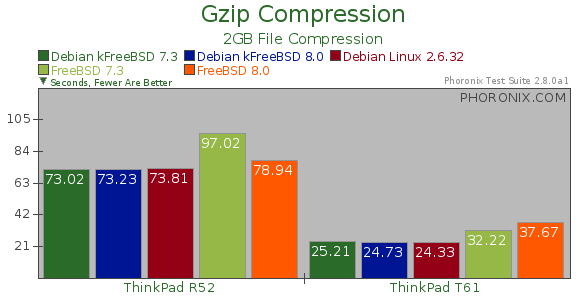 The results between Debian GNU/Linux and Debian GNU/kFreeBSD with its 7.3 and 8.0 kernels were extremely close to one another with the Gzip compression results even with the file-system differences too. However, with the Gzip test there is one thing that can be drawn and that is the Debian installations were much faster than FreeBSD -- with both the 7.3 and 8.0 releases.