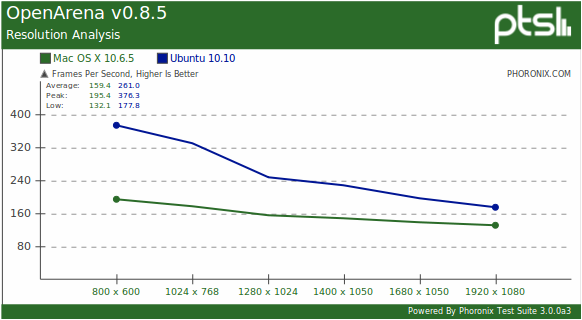 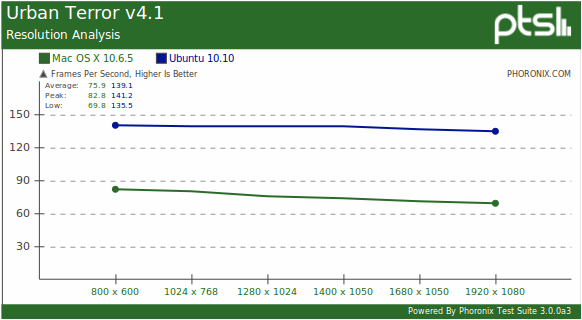 The Urban Terror results are much like those from Nexuiz, but again the Ubuntu Linux operating system with NVIDIA's official driver for the GeForce GT 330M resulted in an 83% lead on average with this ioquake3-powered game.

Apple may have moved things forward when delivering the Snow Leopard Graphics Update earlier this year to tune their OpenGL stack for performance and additional OpenGL capabilities, but their driver performance under Mac OS X with their current hardware offerings is a long-shot from what can be found under Linux when it comes to OpenGL and NVIDIA's official driver. Of course, when looking at the OpenCL performance atop the GPU, Apple is currently leading in that area as one of the vendors to originally spearhead that GPGPU API while NVIDIA continues to focus upon OpenCL and still strongly maintain their CUDA architecture.

The other item worth noting is that the Linux OpenGL performance is largely attributed to NVIDIA's well-tuned proprietary driver. If using the open-source Nouveau graphics driver that was created by the open-source Linux community via reverse engineering, the performance is far behind the proprietary driver and would have been beat out by Apple's OpenGL driver efforts. The Mesa and Gallium3D driver architecture used by Nouveau and other open-source Linux GPU drivers is still not well-optimized for performance and there's lots of other work to be done before we can see such drivers performing close to their proprietary brethren. The open-source graphics drivers on Linux really aren't meant for heavy gaming or any demanding tasks at this point besides desktop usage. The NVIDIA Linux driver is largely attributed to being so fast because its code-base is mostly shared with the NVIDIA Windows driver so many of the optimizations are carried across all supported platforms (Windows, Linux, BSD, and Solaris) aside from the OS-specific bits. This is much the same story as with AMD and their proprietary Catalyst driver between Windows and Linux, which is also at a near performance and feature parity.

Regardless, hopefully with Mac OS X 10.7 "Lion" or via another Snow Leopard Graphics Update we will see additional performance work carried out by Apple engineers as they certainly still have lots of room for improvement and taking full advantage of the hardware under their operating system. Besides falling behind in frame-rates, Apple's NVIDIA driver also only supports the full OpenGL 2.1 specification where as NVIDIA's proprietary driver on Linux supports OpenGL 3.3 and other functionality not currently exposed on Mac OS X.