Benchmarks Of The Gentoo-based Sabayon

Written by Michael Larabel in Operating Systems on 4 January 2010. Page 1 of 5. 79 Comments

For those looking to experiment with a Gentoo-based Linux system but are not looking forward to the obstacles of installing Gentoo itself, an easier and quicker approach can be to use a distribution like Sabayon Linux. Sabayon uses pre-compiled x86 and x86_64 packages for installing the Linux distribution from its LiveDVD and uses their own Entropy system for package management, though these binary packages are compiled from Gentoo's Portage and using the Portage system is still available. The LiveDVD installer is also very easy to use and is just like using Ubuntu's Ubiquity or Red Hat's Anaconda. With all the benchmarking though of Ubuntu and Fedora as of late on Phoronix, we found it time to put out some benchmarks of Sabayon Linux. Up today are benchmarks from the recently released Sabayon 5.1 along with the older Sabayon 4.2 and for comparison is Kubuntu 9.10. 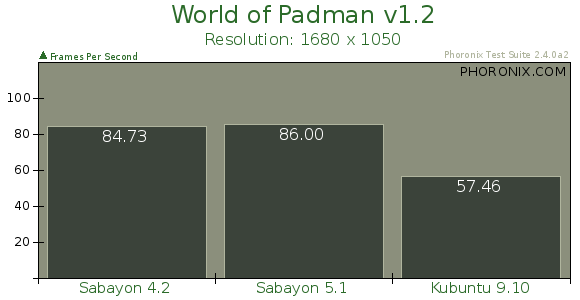 With World of Padman the frame-rate was quite close between Sabayon 4.2 and 5.1, but interestingly, its performance was substantially faster than in Kubuntu 9.10 even with the same NVIDIA graphics driver. The Gentoo-based Sabayon was about 50% faster with this ioquake3 test than the KDE version of Ubuntu. 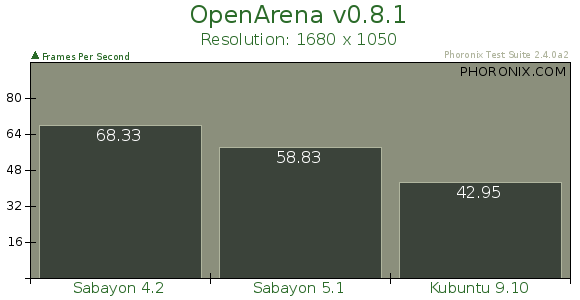 Sabayon 5.1 had regressed compared to Sabayon 4.2 with the OpenArena game, but Kubuntu 9.10 came in well behind both Sabayon Linux releases.