Mutter Can Cause A Gaming/OpenGL Performance Hit Too

Last month we looked at the cost of running Compiz by means of looking at how the window manager affected the frame-rate of several different games and whether compositing was used. We also tested out several different drivers and pieces of hardware. When Compiz was running rather than GNOME's Metacity it often caused a measurable drop in the OpenGL performance and then we later found this to be the case too with KDE's KWin. Today we are seeing if and how using Mutter, the window manager for the GNOME 3.0 desktop that uses Clutter-based compositing, will affect the performance of several different open-source games.

Mutter is a key component along with the GNOME Shell for the GNOME 3.0 desktop. Mutter has been in development since even before the GNOME 2.28 release and was originally a fork of the GNOME 2.x Metacity window manager that added in support for using the Clutter tool-kit for providing the compositing support. Clutter in turn uses OpenGL / OpenGL ES for providing hardware-accelerated animations and effects. Metacity meanwhile is no longer being actively developed aside from receiving bug-fixes. Mutter is already available in many distribution repositories (such as Ubuntu 10.04 Lucid) for running as an alternate window manager with a GNOME 2.28/2.30 desktop. To see how Mutter is affecting the system's performance we had installed an Ubuntu 10.10 "Maverick Meerkat" daily LiveCD from 2010-06-17 to look at the performance with the latest packages.

The games we ran via the Phoronix Test Suite in full-screen mode at the native X.Org Server resolution (1920 x 1080) were OpenArena, World of Padman, Smokin Guns, Tremulous, and Urban Terror. We tested the Radeon X1950PRO with the open-source ATI driver stack currently in Ubuntu Maverick along with the Intel Clarkdale (Core i3) graphics and its current Maverick driver stack. 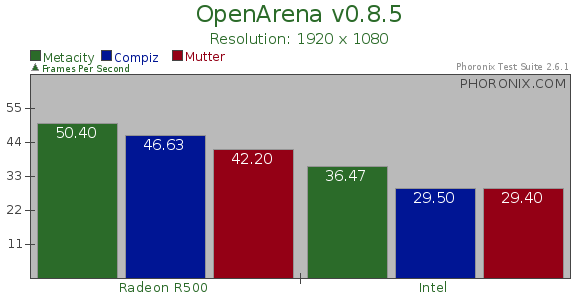 On the ATI Radeon R500 side with the classic Mesa stack, running Mutter led to an even lower frame-rate than what was experienced when running Compiz. Running Metacity was 19% faster than Mutter with the RV570 graphics card with this game. On the Intel graphics side, there was not any significant difference in performance between Compiz and Mutter, but using Metacity was 24% faster than Mutter/Compiz. 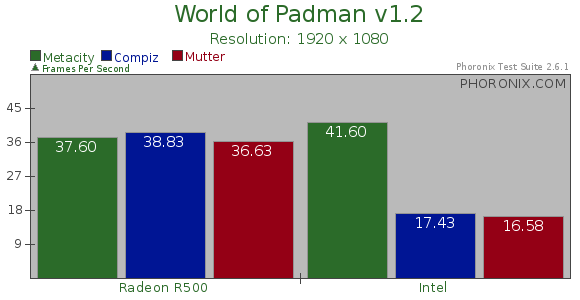 When running World of Padman with the open-source ATI driver the frame-rates were close between the three tested window managers with just a spread of two frames per second. While the ATI driver did well, the open-source Intel driver took a hit with the compositing window managers on this game. World of Padman had an average frame-rate of 41 FPS when running Metacity, but with Compiz it dropped to 17 FPS and then 16 FPS with Mutter.