Recently when benchmarking the Btrfs and EXT4 file-systems we were left surprised that the performance of the next-generation Btrfs file-system had regressed against EXT4 to the point where the evolutionary file-system is measurably faster in a greater number of disk benchmarks. In fact, even with solid-state drives and Btrfs offering an SSD optimized mode, it still conceded to EXT4. It turns out that in the Linux 2.6.35 kernel, Btrfs regressed. This regression should have been fixed with the Linux 2.6.36 kernel, but recently when benchmarking EXT4/Btrfs against ZFS-FUSE on a 2.6.36 development snapshot we found its performance to still be poor for Btrfs compared to EXT4. To confirm where these two most prominent Linux file-systems are at right now, we have new EXT4 and Btrfs performance results from the Linux 2.6.34, 2.6.35, and 2.6.36-rc3 kernels. 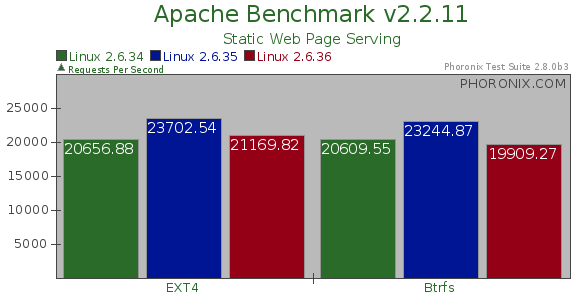 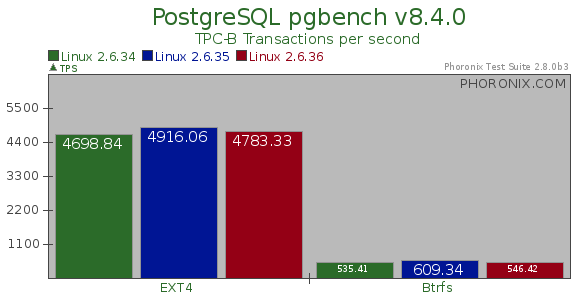 With the PostgreSQL server benchmark, there was another regression between the Linux 2.6.35 and 2.6.36 kernels that affected both EXT4 and Btrfs.

There was not much of a change in the PostMark performance between the 2.6.34 and 2.6.35 kernels for either EXT4 or Btrfs, but with the Linux 2.6.36-rc3 kernel the performance has fallen significantly. The EXT4 performance is down by 33% and Btrfs is down by 40%.