Running An Encrypted LVM In Ubuntu 10.10

Back with Ubuntu 7.10 an option was added to Ubuntu's alternate CD installer to easily setup an encrypted LVM during the Ubuntu installation process. This would better protect your personal data in the case your laptop or mobile device was ever stolen or misplaced as the Ubuntu Linux installation cannot boot if the encrypted LVM cannot be mounted with the encryption pass-phrase. Of course, encrypting the entire root partition can cause a performance penalty as some of our earlier results have shown while introduced in Ubuntu 9.04 was support for home encryption where only your SWAP and home folder is encrypted and this is done using eCryptfs. This continues to be Canonical's preferred method of encrypting user data with it being available from the standard Ubuntu installer while even three years later only the install-time encrypted LVM support can be accessed from their alternate installer. For those serious about encrypting their disk drive on Linux, we have new benchmarks from Ubuntu 10.10 showing how an encrypted LVM will affect your file-system performance. To satisfy some reader requests we simply ran a few disk benchmarks when an Ubuntu 10.10 development snapshot was installed on an un-encrypted LVM and then again, when the root file-system was under an encrypted LVM setup by the Ubuntu Maverick alternate CD installer. Ubuntu 10.10 was used with the Linux 2.6.35 kernel, X.Org Server 1.9.0, GCC 4.4.3, and an EXT4 file-system. The test system was a Lenovo ThinkPad W510 with an Intel Core i7 720QM CPU clocked at 1.60GHz with a total of eight cores (physical quad core + Hyper Threading), 4GB of system memory, a NVIDIA Quadro FX880M graphics processor, and the disk used was a 160GB Intel X25-M SATA 2.0 SSD (SSDSA2M160). 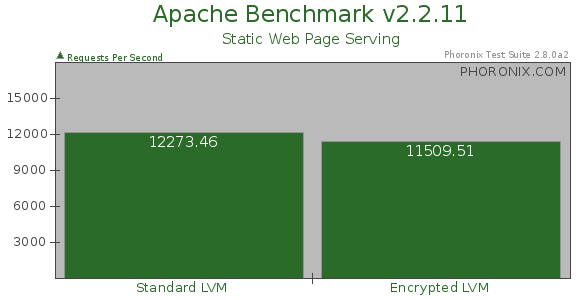 When firing up the Phoronix Test Suite with the Apache test profile, using an encrypted LVM of the entire disk resulted in a 6% performance drop compared to using an LVM without LUKS encryption.