Written by Michael Larabel in Display Drivers on 7 December 2009. Page 1 of 5. 15 Comments

For the month of November we ran the 2009 Linux Graphics Survey, which is a survey in regards to X.Org and the Linux graphics stack that we have been hosting annually for the past three years. This year there was 13,836 results submitted and we have now had the time to go over these results and are publishing all of the numbers today.

While the survey has ended, all of the questions and possible choices remain available. There were 13 questions with most of them being the same from previous years. When looking at the results it is important to remember that the participants were able to select more than one option for each question if relevant. For those interested, our 2008 survey results (and 2007) are still available too. However, without further ado, here are the results. 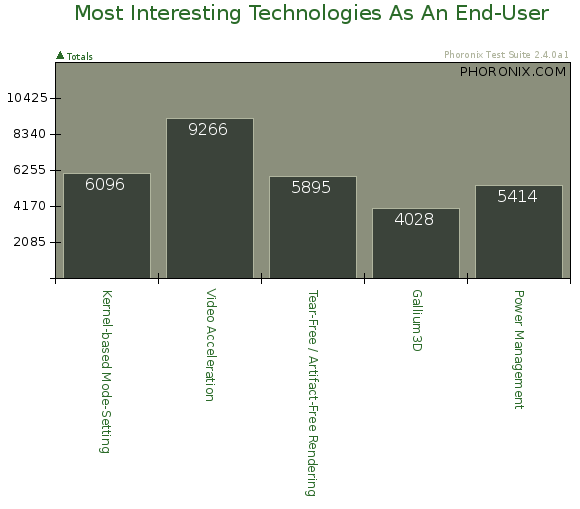 We began the 2009 survey by asking which of the listed technologies the user(s) were most interested in as an end-user. The choices were between kernel mode-setting, video-acceleration (XvMC / VA-API / XvBA / VDPAU), tear-free / artifact-free rendering, Gallium3D, and power management. This year the most popular choice was video acceleration and it was most popular by a large margin -- over 50% more votes than the second most interesting technology: kernel mode-setting. Following video acceleration and kernel mode-setting was tear-free / artifact-free rendering, power management, and then lastly was Gallium3D. Last year KMS was the most popular technology followed by video, but with KMS being a reality and is now prevalent on Linux for ATI and Intel hardware and emerging for NVIDIA hardware through the Nouveau driver, this may explain why its becoming less interesting to individuals. 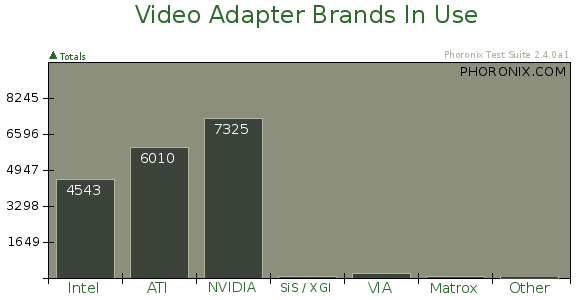 Next up we found out which video adapter / graphics card brand(s) were being used by our survey participants. NVIDIA was the most common brand at just over 7,325 votes followed by ATI at 6,010, and then Intel at 4,543. VIA was just at 243 while SiS / XGI was halved at 105 and Matrox managed to come in at 109. Of those that participated in the survey, 68 were using some other brand. These results show NVIDIA commanding about 40% of the Linux systems followed by ATI/AMD at 33% and Intel at 25%. Compared to last year's numbers, NVDIA lost a point or two of its market-share while ATI/AMD remained roughly the same and Intel had gained about 4%.

Now A Word From The People At Test-King: Ensure your success in hp2-e30 exam with up to date testking 199-01 dumps and testking ns0-154 practice exam.