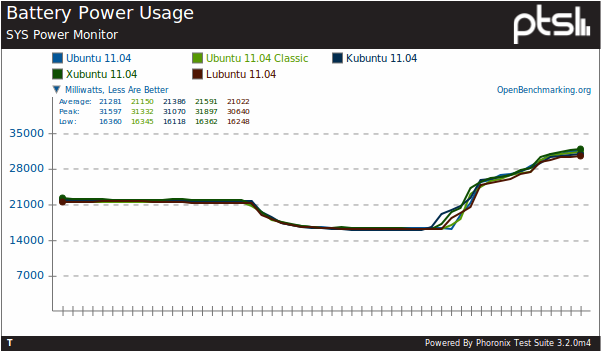 The second test was of the battery-power-usage test profile that looks at the power consumption when idling, then when idling while the display has been switched off with DPMS, and then the display restored and MPlayer is started to playback a brief 1080p sample video. When it came to this idling and video workload, all five configurations had roughly the same amount of power being consumed. These tests were done using the Phoronix Test Suite.

The LXDE desktop is generally said to be the fastest and lightest desktop environment, but it does not provide any dramatic advantage over GNOME/Xfce, at least in the hardware used for this brief test. Interestingly, when using KDE's file manager, web browser, and file navigation, it had consumed roughly 10% more power than the other desktops on this Intel+ATI notebook. More Linux power tests are forthcoming.