Unigine Heaven Shows What Linux Gaming Can Look Like

While screenshots are one thing, to get a look at how much more demanding Unigine Heaven is over its Sanctuary and Tropics predecessors, we used the Phoronix Test Suite to compare the three Unigine benchmarks on Linux. These benchmarks are from an internal build of Unigine Heaven. Since then the engine found in this demo has advanced more and the frame-rates are likely a bit lower. New tests are coming. 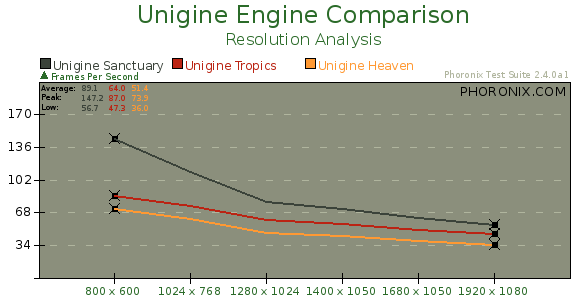 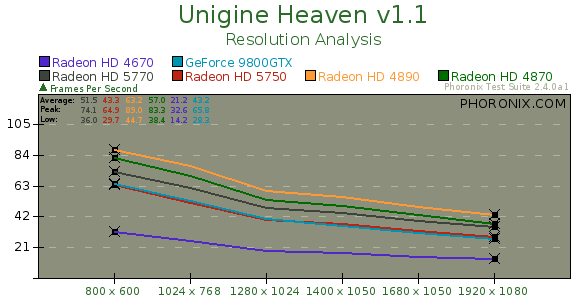 As you can see from our first Unigine Heaven benchmarks, it certainly does a good job stressing the graphics cards. Running at 1920 x 1080 the Radeon HD 4870 (RV770) managed to run at 36 FPS, which makes it still mostly playable. The NVIDIA GeForce 9800GTX though had its average frame-rate at this resolution at 28 FPS. Even when running at 800 x 600, the ATI Radeon HD 4670 was only able to run at 32 frames per second. Also keep in mind that this is just with the default Unigine settings -- we still could push the driver's anti-aliasing and anisotropic filtering settings higher, but it will drop the frame-rate even more.

Obviously, this tech demo will beat up any graphics card that is currently on the market and very heavily stresses the Linux driver stack, but if you get it running well on your hardware, you can be prepared to be stunned by its impressive graphics capabilities. These are the best graphics you will be able to see natively on Linux at this time. Now we just need some Linux games running off the Unigine engine. Aside from Unigine's clients, Unigine Corp itself is also working on its own game, which was temporarily stalled due to work on this Heaven demo, but hopefully that will pickup pace now and we will see some form of that in 2010 on Linux. Primal Carnage is also coming to Linux and uses this game engine. You may also want to read our interview with the Unigine developers.