Testing The Power Management Of Ubuntu 10.04

The netbook we used for checking in on its battery performance was a Samsung NC10 that bears an Intel Atom N270 processor, 2GB of system memory, Intel GMA 945 graphics, an OCZ 32GB Core Series SSD, and a 1024 x 600 LVDS panel. Like our ThinkPad battery testing, we started by monitoring the battery consumption with Ubuntu 9.10, Ubuntu 10.04, and Ubuntu 10.04 with the updated power management packages as the system idled for two minutes. 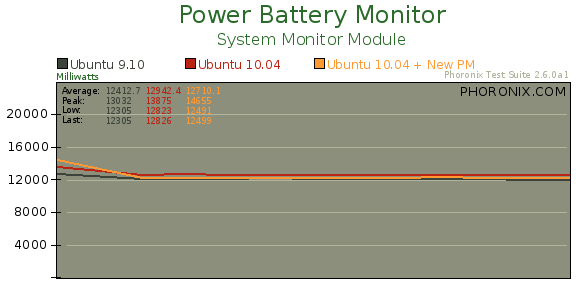 While Ubuntu 10.04 carried a slight power savings over Ubuntu 9.10 when idling with the Core 2 Duo notebook, this was not the case for our Atom-powered Samsung netbook. Ubuntu 10.04 at this point was consuming about one half Watt more power than Ubuntu 9.10, but with the updated power policies it dropped by about 200 Milliwatts. We also ran the battery-power-usage test profile on the Atom-powered netbook. 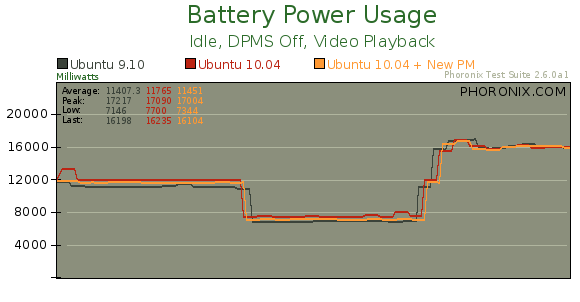 On average, there was about a 300 Milliwatts saving with the newer pm-utils and pm-utils-powersave-policy packages, but still on the Atom netbook and the Ubuntu 10.04 snapshot, it was ever so slightly behind Ubuntu 9.10. Lastly, we ran the PostMark benchmark. However, as the Intel netbook has out-of-the-box 3D acceleration on Ubuntu -- unlike the ThinkPad T61 with its NVIDIA graphics that require the installation of the proprietary graphics driver as the open-source Nouveau support does not provide the Gallium3D driver in Ubuntu 10.04 -- we first ran OpenArena at 1024 x 600 via the Phoronix Test Suite and then immediately afterwards it kicked into running PostMark. Here are those results from OpenArena / PostMark. 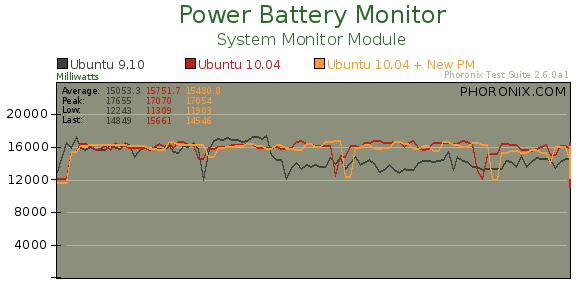 With our final test of stressing the Atom netbook with OpenArena and PostMark, on average there was about a 271 Milliwatts saving with the newer packages, but still put the Lucid Lynx as going through more power than Ubuntu 9.10.

From our Core 2 Duo notebook it's looking like Ubuntu 10.04 "Lucid Lynx" shaping up to go through less power than Ubuntu 9.10, but with the Atom netbook this is not necessarily the case. We are a bit surprised that Lucid's not doing better than it is, at least with the hardware selection that we have tested Ubuntu 10.04 on, which is not limited to the two systems mentioned in this article. For instance, the Intel DRM code that is from the Linux 2.6.33 kernel should have better power management support than what is found in Ubuntu 9.10. This is just one of the areas that have experienced greater power optimizations in recent months, plus the Ubuntu-specific work such as with pm-utils-powersave-policy, but still we are looking at just minor battery savings with Ubuntu 10.04 and in other cases regressions leading to a shortened battery life. Aside from the battery performance with Ubuntu 10.04, it is certainly booting faster, features some speedier kernels, and yes, it has a brand new theme too, among many other changes.

In addition to articles such as these that we publish at Phoronix looking at the Linux desktop performance in different areas, you can also monitor the performance of the latest Ubuntu development packages on a daily basis at ubuntu-tracker.phoromatic.com along with daily kernel benchmarks of the latest Linux code at kernel-tracker.phoromatic.com to look for performance changes to get excited about (or disgruntled about, in the case of bad regressions) for future releases of Ubuntu Linux.