Testing The Power Management Of Ubuntu 10.04 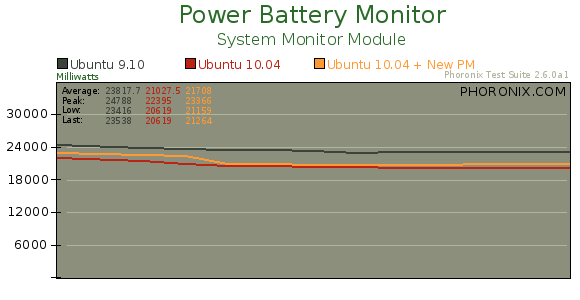 When the system was simply idling, Ubuntu 10.04 consumed two (almost three) Watts less than Ubuntu 9.10. Not bad! Its peak power consumption was also better than the Karmic Koala as well as where it bottomed out. However, the new power management packages did not really help this test. The average power consumption was slightly higher to start out with than the older packages, which may just be the time that it took for the new power management policies to kick in, but /var/log/pm-powersave.log confirmed the scripts were successful. 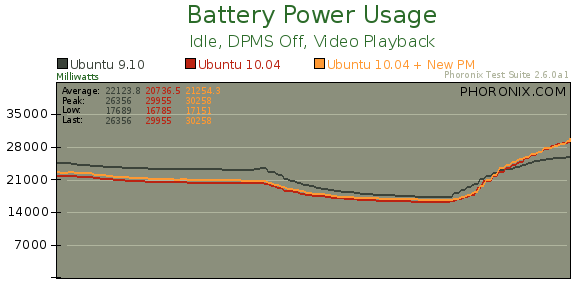 Next, the 6-cell battery was monitored when using the Phoronix Test Suite's battery-power-usage test profile. This test lets the system idle again followed by turning the 1680 x 1050 LVDS panel off via DPMS and then restoring the display and firing up MPlayer to playback a brief sample file. Again, the ThinkPad T61 consumed less energy with Ubuntu 10.04 than in Ubuntu 9.10. However, like our simple idle test, the upgraded pm-utils and pm-utils-powersave-policy packages did not appear to have much of an impact in extending the battery life. 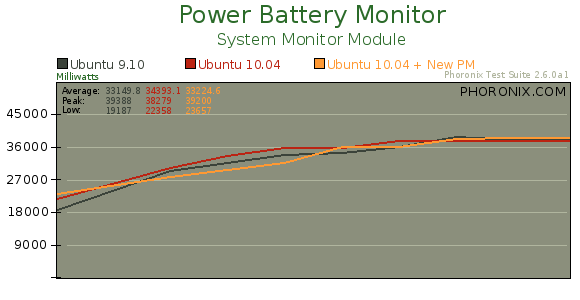 To see how the battery power consumption looked when the Intel notebook was under load, our third and final test for the notebook was monitoring the battery performance as we ran the PostMark disk benchmark. Interestingly, when the system was under load, Ubuntu 10.04 by default went through more power than Ubuntu 9.10 -- by more than one Watt. However, when testing out the new power management policy packages, the battery power was back to being on par with the 9.10 release.