Again, this comparison isn't 100% accurate since there isn't a clean way to precisely compare the open-source and closed-source drivers over time due to a variety of reasons, but this should provide some guidance to at least how the open-source driver can compare to ATI Catalyst releases of the past. With the Phoronix Test Suite we ran Tremulous, Warsow, World of Padman, and Urban Terror at all available resolutions with the ThinkPad T60 bearing an Intel Core Duo T2400, 1GB of system memory, an 80GB Hitachi HTS541080G9SA00 disk drive, and the Mobility Radeon X1400 128MB graphics. 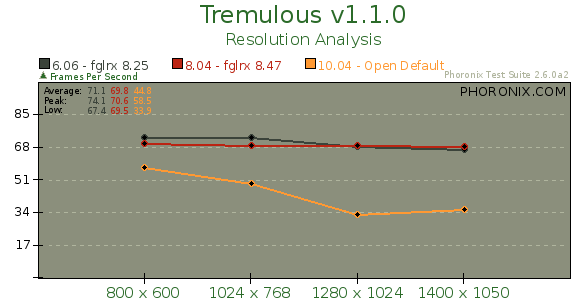 Starting with Tremulous, the current R500 Mesa driver as found in Ubuntu 10.04 LTS is still no competition for even a four-year-old Catalyst driver. There was not much difference in the performance between Ubuntu 6.06 and 8.04 with the Catalyst / fglrx driver since these tests are rather CPU-bound by that driver, but that is all that will run with Mesa and not the more demanding GPU benchmarks we support. Tremulous is playable up to 1400 x 1050 with the open-source Lucid Lynx driver stack, but still it's only about 50% the speed of an old proprietary driver. 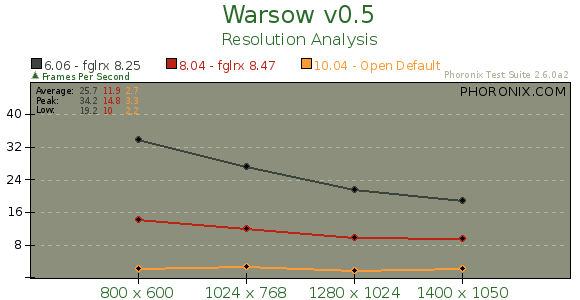 Lucid's graphics stack is not good enough to play Warsow and it was noticeably slower than the two older proprietary drivers. Interestingly, the newer Catalyst driver code-base has regressed with fglrx 8.47 compared to fglrx 8.25 with regard to the Warsow frame-rate.