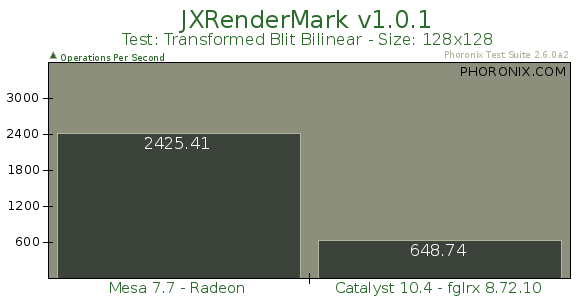 Ending out our testing was JXRenderMark that tests the X Render implementation, where the open-source Radeon driver came out ahead.

If your desktop experience heavily depends upon using OpenGL, the proprietary Catalyst driver for Linux still is really the only option. As our 3D tests show, the Catalyst driver remains many times faster than the classic Mesa Radeon driver in every test -- nearly eight times faster in some tests. The open-source Radeon stack cannot also handle newer OpenGL Linux applications and games like Enemy Territory: Quake Wars. Fortunately though the open-source Radeon graphics stack is continuing to go through many changes and in the coming months we will hopefully see the DRI2/KMS support mature to a greater extent (since as our earlier tests show, on the Radeon side DRI1/UMS is still generally faster) as well as the emergence of a Gallium3D driver for the newer ATI Radeon graphics processors.

While the R300g graphics driver has shown it can outperform the classic Mesa driver in many tests, it still would be no competition for the Catalyst driver and a fully functioning R600/700/800 Gallium3D driver is still many months out. Aside from the OpenGL performance, however, the Radeon driver does have comparable 2D acceleration and X-Video playback support to the Catalyst driver. There's also kernel mode-setting support on the open-source side and a pleasant "out of the box" experience with Compiz, et al, assuming you don't feed it with too much OpenGL work. Keep in mind that this testing was done with an ATI Radeon HD 4830 graphics card, which remains a relatively high-end part, and that with lower-end R600/700 ASICs some of the open-source games tested will not even produce a playable frame-rate especially at the higher resolutions.

We will certainly continue with our Mesa, Gallium3D, and Catalyst benchmarking adventures. Stay tuned!