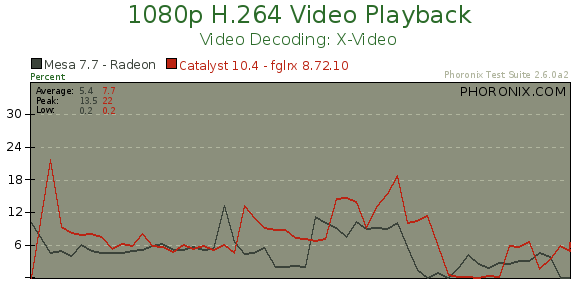 We began this testing by looking at the MPlayer H.264 video playback performance by monitoring the CPU usage when playing a sample file using X-Video. AMD's X-Video Bitstream Acceleration (XvBA) was not used since the open-source ATI driver does not support it and it is reliance on using VA-API and a wrapper still is not ideal. Anyhow, the average CPU usage was close between the open-source Radeon stack and the proprietary Catalyst driver. The CPU usage was actually slightly higher with the Catalyst 10.4 package, but by only about 2%, which in the grand scheme of things for CPU usage is indifferent. Worth noting though is the highest that the CPU usage spiked was also much greater than with the Radeon driver. 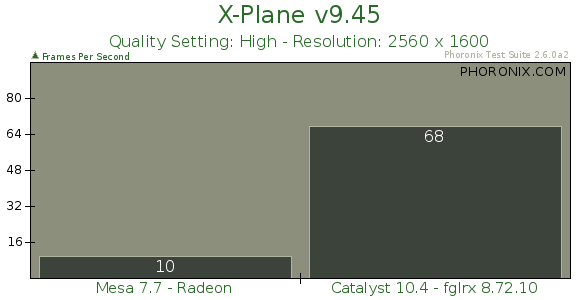 Using the new X-Plane 9.45 test profile available through the Phoronix Test Suite, we ran this flight simulator at 2560 x 1600 on our Samsung SyncMaster 305T 30-inch display. The classic Mesa driver churned along at only ten frames per second, while using Catalyst on the same hardware was almost seven times faster with an average frame-rate of 68 FPS. 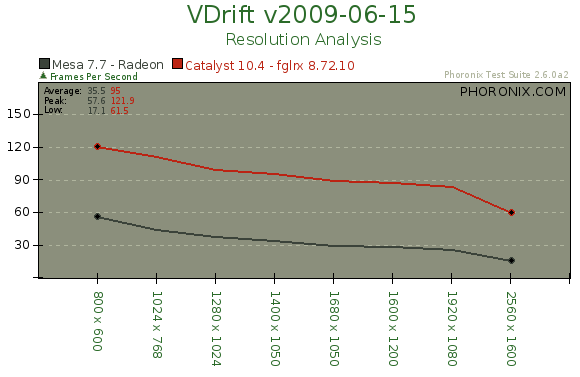 Our next OpenGL test looked at the driver performance with VDrift. With this drift racing game the performance was again in significant favor of Catalyst, but this time not by a seven-fold increase. On average, Catalyst 10.4 was 2.67x faster than the Radeon DRI driver. This was quite consistent with resolutions from 800 x 600 up through 2560 x 1600.