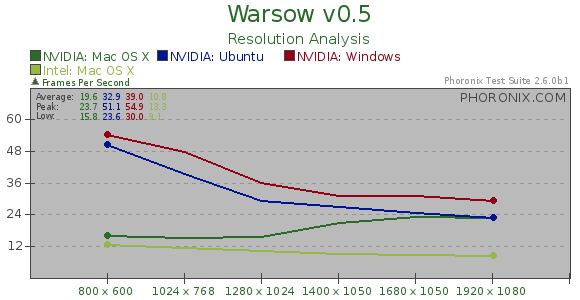 With the popular Warsow game that is open-source, Windows 7 again was the fastest operating system handily beating Ubuntu 10.04 LTS by 19% on average and Mac OS X 10.6.3 by 1.98x. In regards to the performance of NVIDIA graphics with Warsow on Mac OS X 10.6.3, our 10.6.3 regression article showed that Warsow was one of the areas that has regressed significantly with this Snow Leopard point release. 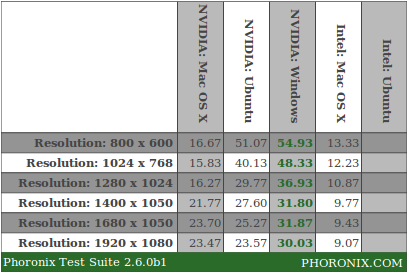 In terms of the Intel graphics performance with Warsow, Mac OS X 10.6.3 was the hands-down winner as the Intel Mesa DRI driver stack found in Ubuntu 10.04 LTS simply was not good enough to run this game. Mac OS X though with the GMA 950, however, could not handle providing a playable experience.

Our final test is looking at the X-Plane 9.45 flight simulator performance across Mac OS X, Windows, and Ubuntu Linux. Like all of the other results shared today, Microsoft Windows 7 Professional on the Mac Mini with the NVIDIA graphics once again produced the highest frame-rates. Windows 7 was on average 72% faster than Mac OS X 10.6.3 with its NVIDIA OpenGL driver. The Intel graphics could run X-Plane 9.45 on Mac OS X -- albeit at just a few frames per second -- but the Intel Linux Mesa stack could not. 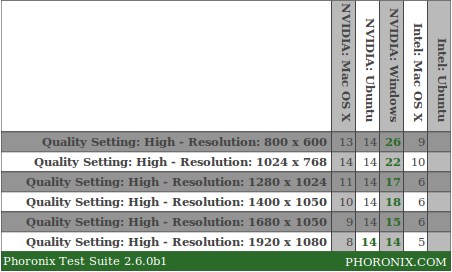