To start with are the Windows and Ubuntu Linux power results from the ASUS Eee PC 1201N netbook. 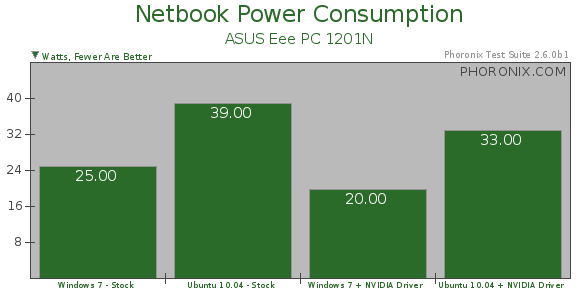 Going into this power consumption testing we figured Microsoft Windows 7 would likely be more power efficient than Ubuntu Linux due to Windows having better ACPI support and more hardware vendors catering to Windows, but we did not expect to see such a wide difference with the ASUS Eee PC. With the "out of the box" experience for each operating system, Ubuntu 10.04 LTS was consuming 56% more power than Windows 7 Professional!

When both operating systems had NVIDIA's proprietary driver installed for better GPU power management of the NVIDIA ION chipset, Ubuntu "Lucid Lynx" went through less power, but Windows still did better and it turned into a 65% difference. Ubuntu 10.04 LTS is using the Nouveau KMS driver by default for the open-source NVIDIA driver, which currently does not implement any power management support. See our recent articles entitled The Real Need For Nouveau Power Management and Nouveau Is Power Hungry On Desktops Too. However, even when using NVIDIA's binary driver, Windows 7 still had the definitive advantage for this ultra-portable PC. 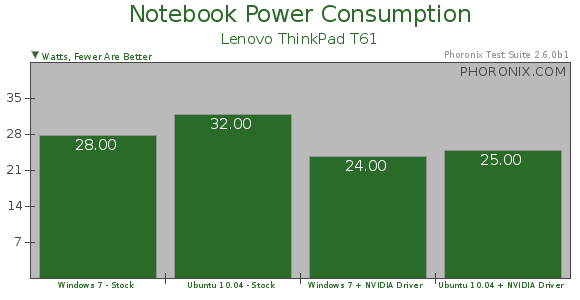 Fortunately, with the Lenovo ThinkPad T61 the power consumption between Windows and Ubuntu Linux were not nearly as large as the Atom 330 + ION-based netbook. The ThinkPad T61 with Ubuntu 10.04 LTS was consuming 14% more power than Windows 7, but when both were loaded with NVIDIA's binary driver that leverages PowerMizer and other power-savings techniques, Ubuntu 10.04 LTS averaged to consume just 4% more power.

It is unfortunate to see Ubuntu 10.04 LTS going through much more power than Microsoft Windows 7 on these mobile devices, particularly with the modern ION netbook and to still some extent the more mature Intel Penryn notebook with the NVIDIA Quadro graphics. These differences will lead to Windows users noticing a dramatically shorter battery life for those switching to Ubuntu 10.04, which is especially a problem in the netbook era. These were the only 64-bit notebooks we had at the time of testing, so unfortunately we do not know how the ATI or Intel notebook power consumption differs at this point. Fortunately, improving power management has been of interest to more open-source developers in recent times, so hopefully by Ubuntu 10.10 or Ubuntu 11.04 there will be more pleasing news to report to Linux users.