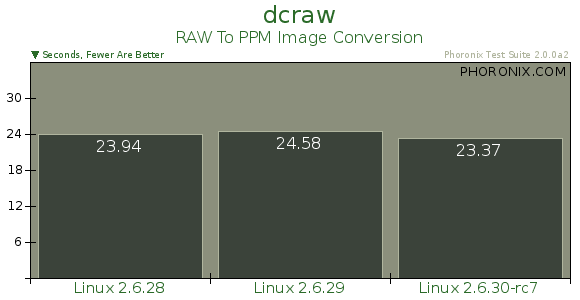 There was some small changed with the dcraw performance for converting RAW image files to PPM, but the differences were quite small. 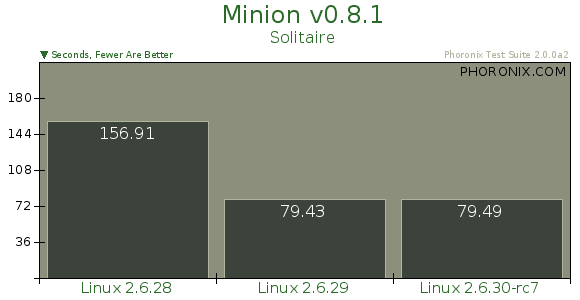 Ending out this Linux kernel benchmarking session was Minion, which is an open-source constraint solver. This test profile was tasked with a Solitaire solver. Between the Linux 2.6.28 and 2.6.29 kernels, there was a dramatic boost in performance, which was maintained with the Linux 2.6.30-rc7 kernel.

While this round of kernel testing was brief with just three kernels and eleven tests, it does seem that particularly when it comes to disk operations there are improvements with the Linux 2.6.30 kernel, which should not come as a surprise. There were also a few performance regressions, however. Beyond that the tests show few other changes with this kernel upgrade. If you would like to run your own Linux kernel benchmarks, try out the Phoronix Test Suite, which is our open-source software that will allow you to run and automate almost any test on Linux, OpenSolaris, *BSD, and Mac OS X operating systems. Today's kernel test results can be discussed in the Phoronix Forums.