Earlier this week I noted there's new Apple hardware in our labs being used to tighten up our Mac OS X support within the Phoronix Test Suite, OpenBenchmarking.org, Phoromatic, etc. However, in the middle of working on Iveland, I have been carrying out a few Mac OS X benchmarks comparing its performance under the 2010 Apple Mac Book Pro to other operating systems. With the Core i5 notebook being much faster than the past Apple Mac Minis used in comparisons like looking at their enhanced OpenGL stack and benchmarking Mac OS X against Linux and Windows 7, the results are more interesting and there's also a greater variety of testing possibilities now with the recent Phoronix Test Suite advancements. Next week there are some very interesting Apple-related benchmarks to be published, but before the weekend here are a few tests from this Apple Mac Book Pro looking at its power consumption under Mac OS X 10.6.5 and Ubuntu 10.10. The comparative benchmarks coming out next week are looking at the performance of each operating system where as in this article we are solely looking at the battery's power consumption rate under each operating system with a variety of different scenarios. The Mac Book Pro battery monitoring was done via the Phoronix Test Suite as were the actual tests themselves. Each operating system was left with its default power management options besides disabling the dimming when running on battery power as both displays had dimmed to different levels. Besides installing NVIDIA's proprietary graphics driver, one of the only other changes made to either operating system was installing the Broadcom STA wireless driver via Ubuntu's Jockey for enabling the Apple WiFi support under Linux. 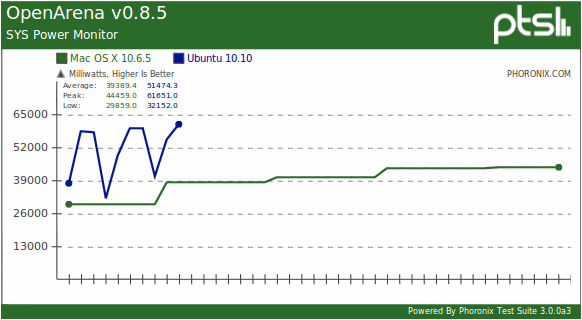 With the first test was the battery power consumption when running the OpenArena game under Mac OS X and Linux. The Ubuntu line is shorter since with the Linux proprietary driver its performance was that much faster than Mac OS X. Anyhow, while Ubuntu 10.10 with NVIDIA's binary blob may run much faster than Mac OS X, Ubuntu on average was consuming 10 more Watts than Mac OS X. The average power consumption during this gaming test under Mac OS X 10.6.5 on this Core i5 + GeForce GT 330M notebook was 39 Watts while with Ubuntu it was at 51 Watts. The peak power consumption was also much higher at 61 Watts where as with the Apple operating system it never topped 45 Watts. 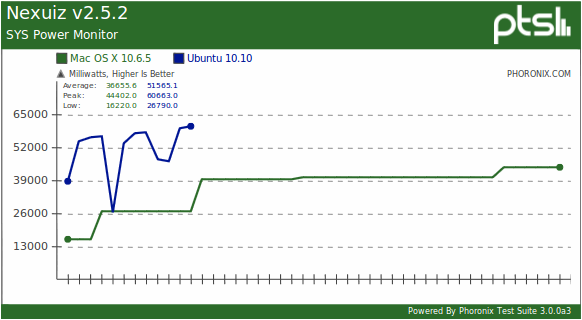 The power consumption story was much the same when running Nexuiz: Mark Shuttleworth's operating system went through much more power than Steve Jobs' OS. If using the open-source Nouveau driver with its Gallium3D acceleration, Mac OS X would have commanded an even greater lead -- both for the power consumption and actual gaming performance. The Nouveau Gallium3D driver is still very slow and only recently has it even gained primitive power management support.