Written by Michael Larabel in Operating Systems on 4 July 2011. Page 3 of 3. 6 Comments 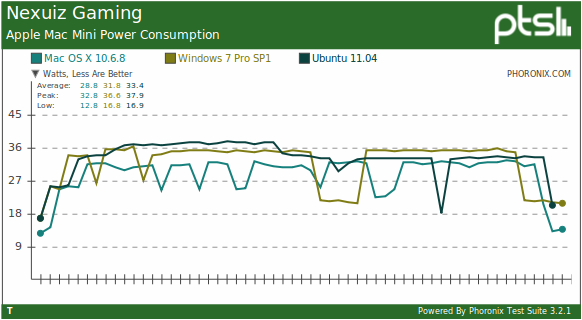 When running the OpenGL Nexuiz game, Ubuntu 11.04 continued burning through more power than Apple Mac OS X "Snow Leopard" did and to some extent, Windows 7 too.

Microsoft Windows 7 Pro SP1 had the highest frame-rate when running Nexuiz on each OS at 1920 x 1080, but on none of the platforms was the HD resolution playable when HDR was enabled.

At least for this Apple Mac Mini, Mac OS X is more power efficient than Windows 7 and Ubuntu 11.04, but it should not be too much of a surprise at all.