After reverting back to the Catalyst 9.4 release candidate, we began overclocking this graphics card using the OverDrive features accessible through aticonfig. Our ASUS Radeon HD 4890 1GB graphics card had a configurable core frequency range from 500MHz to 1000MHz. The GDDR5 memory could be clocked between 975MHz and 1200MHz. The maximum overclock allowed by OverDrive on this ASUS graphics card would allow a 150MHz boost on the RV790 core and a 225MHz boost on the GDDR5 memory, or an 18% and 23% increase, respectively. While the OverDrive ranges are designed to be safe and easy for the end-user, we had no problems hitting those upper thresholds. Even when running various OpenGL tests, the system was stable and we experienced no artifacts or glitches. Below is a quick look when the Radeon HD 4890 on Linux was running at different frequencies in the powerful Unigine Tropics test. 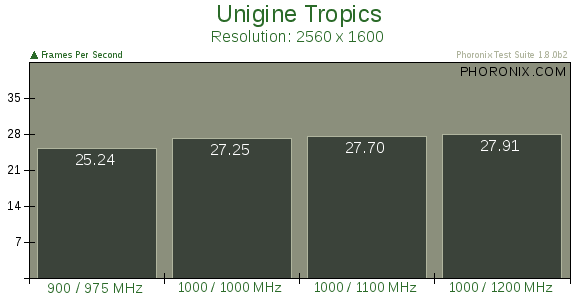 Overclocking the RV790 to 1000MHz and the video memory to 1200MHz led to an approximate 10% boost in performance. That is not too bad considering in the same test the stock Radeon HD 4890 was already 17% faster than the HD 4870. Even with this maximum overclock, the cooling fan continued to dynamically adjust and was not always at its full speed. We are certainly pleased with this overclock, though with the maximum peaks having been reached, we were unable to push this card any further, at least under Linux. Through the ASUS software on Windows there is the ability to tweak the voltages for a better overclock, but unfortunately, that is not accessible under Linux.