Like the reference cooler found on the Radeon HD 4870, the fan on the Radeon HD 4890 was very quiet. When idling the fan was nearly inaudible when the system was housed inside of a SilverStone chassis, but even when the fan speed ramped up under load, we still would define the fan's noise level as low. How hot though does the RV790 core get? Using the Phoronix Test Suite with its support for automatically monitoring sensors during the testing process, we found out. We assembled a test suite that consisted of the system idling for five minutes and then ran the unigine-sanctuary test followed by unigine-tropics and then to run each of the Unigine tests once more before ending out the suite by idling for another five minutes. With the Phoronix Test Suite running each of the Unigine tests three times before averaging the results, in total this thermal suite allowed us to look at the GPU temperature over the course of 50 minutes. The Phoronix Test Suite reads the ATI GPU temperature using the driver's OverDrive 5 support. Additionally, our software also monitored the CPU and system temperatures from the motherboard automatically as well using the LM_Sensors interface. 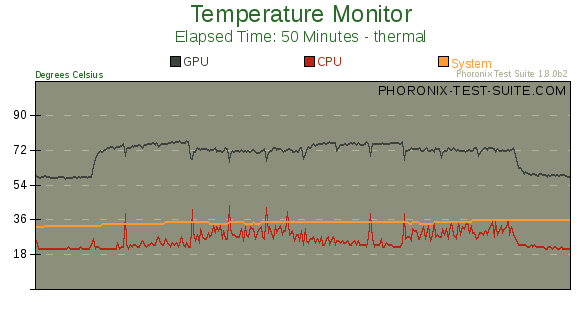 As you can see from the graph, when running at the stock frequencies, the ASUS Radeon HD 4890 idled at around 58°C. When the graphics load had increased from the Unigine tests, the GPU core temperature increased to the mid to upper 70s. The highest temperature recorded by the Phoronix Test Suite system monitor module during the 50 minute period was 78°C. While some may find these numbers high compared to earlier ATI GPUs or some of NVIDIA's products, it is all within an acceptable range and it allows the fan to operate near silently. After the testing had ended, the GPU temperature quickly receded to approximately 58°C.