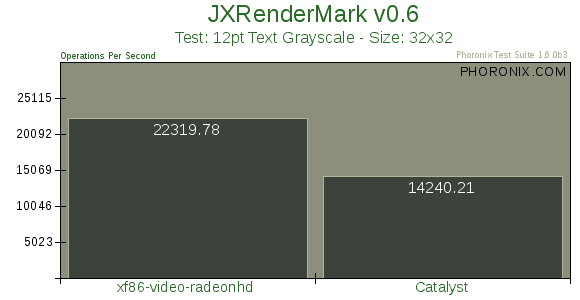 With the last four JXRenderMark tests, the Catalyst driver won three of the tests but lost significantly when it came to the 12pt text grayscale operation.

With our earlier R500 2D testing the Catalyst 8.12 driver had won in 17 of the 28 tests, but with the RV770 2D testing, the same Catalyst driver only scored first in 9 of the 28 tests. The remaining 19 tests had exhibited better performance using the experimental R600/700 support in the DRM and xf86-video-radeonhd driver code. However, this code is still experimental and living in branches of the main driver. Not all 2D EXA operations are being accelerated by the GPU yet, which accounts for some of these results. We will be back with more benchmarks as the 2D and 3D open-source support for the R600/700 support stabilizes. Lastly, there will be improved 2D performance once a proper memory manager (using a combination of GEM and TTM) is in place for the open-source ATI driver and the improvements from UXA acceleration work their way back into EXA in future X Server releases.